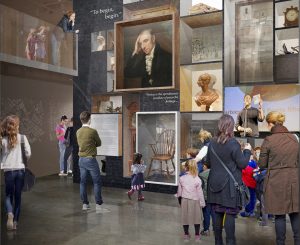 The Wordsworth Trust has been awarded a grant of £4.1million by the Heritage Lottery Fund (HLF) for the Reimagining Wordsworth project. The Wordsworth Trust is based at Dove Cottage, Grasmere, and it looks after the surrounding historic hamlet of Town End. After being awarded a first round pass* in 2016, the Wordsworth Trust has spent two years developing the project, recruiting a dynamic project team, receiving crucial planning permission and matchfunding over £1million in order to secure the grant this month.

Michael McGregor, Director of the Wordsworth Trust, said: ‘This is wonderful news. Funding from the Heritage Lottery Fund will enable us to realise our vision for Reimagining Wordsworth, creating new ways of enjoying Wordsworth’s poetry in the landscape that inspired him.’

Heritage Minister Michael Ellis said: “The Wordsworth Trust celebrates one of the founding fathers of the Romantic age of English literature. I am delighted that, thanks to National Lottery players and the Northern Cultural Regeneration Fund, the Wordsworth Trust will be redeveloped so that future generations can learn more about this much-loved poet and be inspired by the Lake District.”

The Wordsworth Trust will improve the Wordsworth Museum, make Dove Cottage more authentic, open up new green spaces, improve access, give its visitors a better experience and create a programme of exciting activities and events. Work is expected to start in early 2019 and to be completed by April 2020, to celebrate the 250th anniversary of William Wordsworth’s birth.

Reimagining Wordsworth will help to open up the rich cultural heritage of the Lake District, which became a UNESCO World Heritage Site in 2017. As a further endorsement of the cultural activity in the area, the Northern Cultural Regeneration Fund, a £15m Government fund aimed at showcasing the north of England, awarded £3.29million to Cumbria for a project led by Lakeland Arts and the Wordsworth Trust.

About the Project:
Working with architects Purcell and exhibition designer Nissen Richards Studio, the Wordsworth Trust obtained planning permission from the Lake District National Park Authority for the project in December 2017. 2017 also saw an ambitious match-funding campaign to secure over £1million to support the project. Donations came in from South Lakeland District Council, visitors to Dove Cottage, supporters across the UK and internationally, and numerous charitable trusts and foundations. Major funders include the Wolfson Foundation, the Garfield Weston Foundation, the Linbury Trust and the Foyle Foundation.

Over the next two years, the Wordsworth Museum will be expanded and modernised, with stunning views of the surrounding fells offering visitors the chance to stop and reflect on the landscape that inspired Wordsworth. Sensitive conservation work will be carried out in Dove Cottage, ensuring that it becomes more authentic and atmospheric, providing a step back in time from which visitors can get a sense of William and Dorothy Wordsworth’s everyday lives and the humble surroundings in which great poetry was written. There will be new outdoor spaces, a redesigned cafe and terrace overlooking Dove Cottage and a new learning centre where people of all ages and abilities will be able to take part in year-round events. Inspiring new activities will take Wordsworth’s poetry out to communities across Cumbria, following Wordsworth’s wish that his poetry will make us ‘wiser, better and happier’.